The Sport of Golf

The Sport of Golf: How It Pertains to Business, Politics, and Life-long Friendships

Dating back over a century, businessmen, politicians, and many other professionals in all types of careers have used the sport of golf to conduct business, create new relationships or improve existing ones, forge new deals, spend time with family, or simply get to know another person.  In fact there are some people who only decide to learn the game of golf for this specific reason.  If it was possible it would be astonishing to add the amount of money and deals struck with the two or more CEO’s of companies who ended up striking some type of investment deal, merger, political agreement, or just a new friendship while on the golf course.

Golf is the only sport where you have time to invest in building a relationship with your fellow competitors, or just your friends you happen to be playing with.  It’s also a sport where you can often get paired with a stranger and end up making a new friend for life, or at least another friend you can always count on to meet you at the first tee on a moments notice.

Often known as the ‘Gentlemen’s Sport” golf has long been known as a “rich” person’s sport even though it’s more affordable now and hundreds of millions of people play golf everyday around the world regardless of income level.  With that said, the history of the game, all male golf country clubs, and the fact that in the old days, golf was primarily a sport that men played, it became a breeding ground for businessmen or salesmen to impress their playing partners who they were trying to sell their next big deal to.  It became not only a privilege, but a selling point for big corporations to make sure their top salesmen have memberships to prestigious country clubs for this reason alone. If you’ve watched any golf movies, watch the news, pop culture, etc. you’ll already know that this is the case.

Is it a good thing?  Well that’s up for you to decide, personally going out into nature into a beautifully manicured golf course and hitting the ball around, even if hitting into every hazard imaginable, is much better than doing business in an office, home, or even worse some random bar where the salesman is just trying to spend as much money on the other guy’s beverages until he closes the deal.  Actually never mind, that’s never ever happened before.  But in all seriousness, not only is golf a great sport, but it’s a great place to create new or improve existing relationships with friends, family, your children, and yes…even new potential business partners.

Golf is a sport that gives you plenty of time to socialize with everyone in your foursome or group.  There isn’t one other sport that allows you time to walk next to someone for 200 to 300 yards from your tee shot to your second shot, and actually talk to them and get to know them. Whether you ride or walk for an 18 hole round, if you spend 4-6 hours on the golf course with someone, you better believe when you’re done you’d have had plenty of time to talk to them and if you’re not making a business deal you’re at least making a new friend or continuing and re-enforcing an existing friendship. 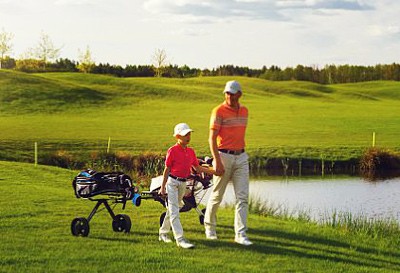 Not to mention, if you truly want to find out the character of a person, whether you already know them or they’re a complete stranger, there is no other sport better than golf.  Golf is game where honor and honesty, pride and confidence, and being your own referee mean more than any other sport created.  This truly does help you get to know the true character of the golfers you’re playing with, we’ve all been there, whether it’s a foot wedge here, a lost ball that after 4 minutes suddenly gets found with a perfect lie and shot angle, the swing and a miss that was supposedly a practice swing, or the most common of all…when it suddenly gets too hard to count past the number 5, then 7’s become 6’s, 8’s become 7’s, etc.  In all other sports, whether it’s baseball, football, basketball, or hockey, there are officials that call the shots and regulate the rules of the sport, and in most cases professional athletes will argue with a referee or umpire’s call regardless of whether or not they know the truthful outcome of the play.  In golf it’s the opposite, golfers take it upon themselves to call their own penalty strokes.  This has happened even in professional PGA golf tournaments, even when golfers these days are watched by millions on television.  Although in today’s day and age, it would be hard for a PGA Tour Pro to violate one of the USGA rules of golf without anyone noticing but if you’ve played a good amount of golf in your life you’ve probably played with someone who has called a penalty on themselves.

It was interesting to see that’s President Donald Trump’s son Eric made the following comment regarding the President’s recent golf round(s) with foreign leaders or potential allies.  “You can sit with somebody in a golf cart where there might be cultural differences and language barriers and have a good time and build a friendship with somebody in a way you could never do sitting across an office table from someone,” ~Eric Trump.  Many Presidents and politicians have been accused of spending too much time golfing, going to political parties, or going to Camp David too often, and while we take no political stance, we do love golf and realize its potential to create relationships with others.  Not only is golf a great sport but you can use it as a means to socialize and learn more about your playing partners’ values, morals, and integrity. And it doesn’t matter whether it’s your friend, enemy, or your biggest golf rival.  You can learn an awful lot about playing even just 9 holes with another person. 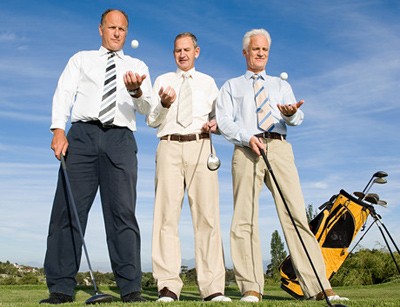 The level of detail from even watching a golfer as an innocent bystander can be invaluable as to the type of person they are in real life.  Golf is a sport with no umpire, referee, and unless you’re playing professional golf on the PGA Tour there is no television to record your every minute move on the golf course.  It is a sport with a long-time tradition of being a game of honor and integrity and that’s what makes it the greatest sport on the planet.  With that being said, it’s no wonder why the golf course makes for an amazing place to conduct business, negotiate important deals, and seal new contracts in your particular business.  The information you can gain about someone during the first 9 holes can help you to close the deal of your lifetime on the back 9.

So whether you’re in business, politics, or just truly want to meet new people and make new friends, get out on the golf course as soon as possible.  If you’re going to the course by yourself, don’t ask for a tee time to play 9 or 18 holes by yourself…agree to play with someone you’ve never met before.  You never know, if you don’t make a friend for life, you may at least make a golf friend for life that can challenge you to make you better and give you that drive we all need to improve our golf game.